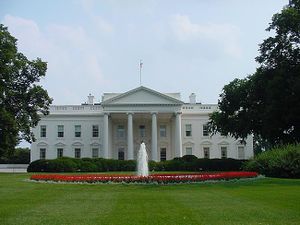 The White House, the official home and workplace of the President of the United States of America.

The White House is the combined home and workplace of the President of the United States of America. The term the "White House" is often used to refer to the office of the presidency, or the president and his staff, as in "the White House had no comment on the controversy."

The official street address of The White House is 1600 Pennsylvania Avenue, NW Washington, DC 20050. While every president since John Adams has lived in the White House, it is not a requirement for the President to reside there. Harry Truman lived across the street in the Blair House (also owned by the government) while the White House was thoroughly renovated in 1949-52.

Its history, and the history of the nation's capital, began when President George Washington signed an Act of Congress in December of 1790 declaring that the federal government would reside in a district "not exceeding ten miles square…on the river Potomac." President Washington, together with city planner Pierre L’Enfant, chose the site for the new residence, which is now 1600 Pennsylvania Avenue. As preparations began for the new federal city, a competition was held to find a builder of the "President’s House." Nine proposals were submitted, and Irish-born architect James Hoban won a gold medal for his practical and handsome design.

Construction began when the first cornerstone was laid in October of 1792. [1] George Washington ordered the construction and helped to choose the site while he was president. Adams and his wife Abigail, moved into the mansion while it was still under construction.

Thomas Jefferson was among the many people who submitted a plan for the White House. His design, however, was not chosen. Instead, James Hoban, an Irish immigrant architect living in Charleston, South Carolina, won the competition and a $500 prize, with a design modeled after Leinster House in Dublin, Ireland. [2]

The original name was the Presidential Palace or President's House; it acquired the sobriquet The White House after it was burned by the British in 1814 during the War of 1812, and subsequently covered over by white paint to hide the exterior scorch marks. In 1901 (1902?), President Theodore Roosevelt officially gave the White House its current name.