A nuclear attack could take several forms such as a dirty bomb or high-atmosphere EMP, but this article will deal with the "traditional" low atmosphere attacks such as those that hit Hiroshima and Nagasaki, Japan. 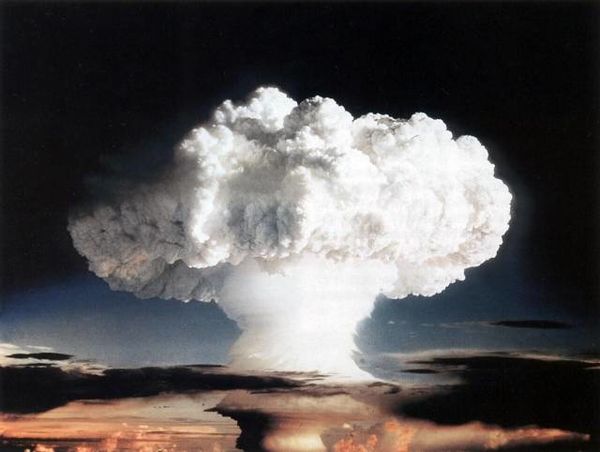 There are two basic types of nuclear warheads employed by military forces, lower yield fission weapons or atomic bombs ("A-bombs" typically measured in kilotons) and high yield fusion weapons or hydrogen bombs ("H-bombs" typically measured in megatons). The former were typically considered theater tactical weapons and the latter were reserved for strategic intercontinental ballistic missiles (ICBMs) and gravity bombs (via bombers). Due to increases in accuracy many lower yield weapons have long replaced H-bombs as the warhead of choice for strategic weapons, particularly in Multiple Independently targetable Reentry Vehicles (MIRVs) which has many warheads on one missile. Additionally there are enhanced yield (or boosted yield) fission weapons or neutron bombs (N-bombs, measured in kilotons) which are designed to cause increased radiation damage in the blast but less blast effect. They were designed specifically to kill people but leave buildings and vehicles intact. These latter weapons were retired from US use in the 1990's but may still be present in other nations' inventories.

Nuclear weapons are classified as Weapons of Mass Destruction (WMD's) and are nominally reserved as weapons of last resort for nations. Ideally they are merely deterrents but with the proliferation of nuclear weapons to unstable nation-states and possibly to terrorist groups they may yet be used outside of a strategic deterrent force.

Nuclear weapons kill in several ways. First is the blast effect that is the same as from any conventional high explosive only much larger. The blast wave moves out from the detonation killing by heat (thermal energy) and concussion. The second effect is by a high burst of radiation ("instant radiation") along several wave lengths, alpha, beta, and most penetrating, gamma rays. These too kill anyone caught out in the open but survivors who were somewhat shielded may survive longer only to die later due to radiation sickness. The third effect is from the radioactive fallout which spreads beta ray emitting material, usually isotopes which decay over time, some as short as two weeks, others as long as a century or more.

Preparing for a Nuclear Attack

To survive a nuclear attack you will need to prepare for three different challenges; the initial blast, fallout, and finally loss of infrastructure. Preparing for these will require food, water, distance, and insulative mass.

While sheltering from fallout your food stores will be all you have since you will be unable to go outside while the radiation dissipates, after the radiation dissipates infrastructure will take a long time to recover and even if you have your own plants and animals to eat it is likely they will not have survived the attack if you were to close to ground zero.

All surface water will be contaminated by any fallout.

Increasing distance from the radiation source reduces the dose due to the inverse-square law for a point source. The distance you need to be to survive a nuclear attack depends on the type of weapon and the yield. The largest bomb tested ever, the Soviet Tsar Bomba was a 50 megaton hydrogen bomb. It was a reduced "clean" 100 megaton device. Yet it still could produce third degree thermal burns from infrared radiation 62 miles (100 km) away from the blast and blast damage 620 miles (1000 km) away. The mushroom cloud was 40 miles (62 km) high and 25 miles (40 km) wide meaning that it could wipe out any American city when you include the other deadly factors present.

The longer that humans are subjected to radiation the larger the dose will be. The advice in the nuclear war manual entitled "Nuclear War Survival Skills" published by Cresson Kearny in the U.S. was that if one needed to leave the shelter then this should be done as rapidly as possible to minimize exposure.

In chapter 12 he states that "Quickly putting or dumping wastes outside is not hazardous once fallout is no longer being deposited. For example, assume the shelter is in an area of heavy fallout and the dose rate outside is 400 R/hr enough to give a potentially fatal dose in about an hour to a person exposed in the open. If a person needs to be exposed for only 10 seconds to dump a bucket, in this 1/360th of an hour he will receive a dose of only about 1 R. Under war conditions, an additional 1-R dose is of little concern."

A shelter near ground zero needs to have sufficient density to stop the penetration by gamma radiation, the silent killer of nuclear attack. One manual during the Cold War recommended that to convert a typical American wood frame home's basement into a fallout shelter would require, at minimum, two feet of earth to be spread across the main floor and up around all exposed walls and windows of the basement. Of course a filter system has to be arranged for air to pass into and out of the shelter. However even this amount will not stop gamma rays from a near blast. For that a shelter needs to be well outside of a likely target area as any shelter within the blast radius will not likely survive unless it is several stories deep.

It is expected that after an intense nuclear exchange between nations that there will be a total societal collapse. Survival will be up to the individual, family and small community in a post apocalyptic world. The following are special risks that come from nuclear attack.

Known clinically as Acute Radiation Syndrome (ARS) it comes from the brief but powerful burst of ionizing radiation (e.g. gamma rays) that will penetrate deep through most insulative masses. Radiation sickness is generally associated with acute exposure and has a characteristic set of symptoms that appear in an orderly fashion. The symptoms of radiation sickness become more serious (and the chance of survival decreases) as the dosage of radiation increases. These effects are described as the deterministic effects of radiation.

The lucky ones will die instantly from a lethal dose. Others will live for a time period with burns on their bodies, their hair falling out as the toxic radiation attacks their internal organs. For some who receive a fatal dose but whose bodies do not show it are termed "walking ghosts." The "walking ghost" phase of radiation poisoning is a period of apparent recovery from radiation poisoning, lasting for hours or up to a couple of weeks, following a dose of 10–50 sieverts of radiation. As its name would suggest, the walking ghost phase is followed by certain death.

Those that do not receive a lethal dose of radiation may still suffer from long term effects such as increased risk of cancers and birth defects.

Treatment reversing the effects of irradiation is currently not possible. Anesthetics and antiemetics are administered to counter the symptoms of exposure, as well as antibiotics for countering secondary infections due to the resulting immune system deficiency.

There are also a number of substances used to mitigate the prolonged effects of radiation poisoning, by eliminating the remaining radioactive materials, post exposure.

Potassium iodide (KI), administered orally immediately after exposure, may be used to protect the thyroid from ingested radioactive iodine in the event of an accident or terrorist attack at a nuclear power plant, or the detonation of a nuclear explosive. KI would not be effective against a dirty bomb unless the bomb happened to contain radioactive iodine, and even then it would only help to prevent thyroid cancer. KI will not save anyone who has received a lethal dose of radiation or even reduce the risk of other cancers.