Forbes Inc. is an American publishing company best known for its eponymous business magazine Forbes which is published bi-weekly. It was founded in 1917 by B.C. Forbes and built up by long-time owner Malcolm Forbes (1917–1990), noted for his intense devotion to capitalism. It is now run by Steve Forbes (1947- ), who has been very active in conservative and Republican Party affairs.

The magazine provides a range of reporting on world business affairs, and is famed for its annual lists of the richest people in America and the world. It calls itself "The Capitalist Tool." 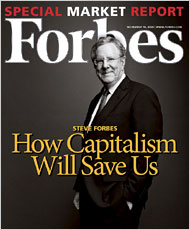 The entire magazine industry has been hit hard by the Recession of 2008, as has the newspaper industry. The subscription base at Forbes is steady at 920,000 copies, but there have been more and more discount offers, and advertising is down 15% from early 2008 to early 2009. There have been layoffs and furloughs among the 1000 employees, a sharp comedown from the days of lavish spending by the Forbes family.

Ad pages have declined even more at the two major competitors; Forbes has a listed revenue of $338 million, compared to $276 million for Fortune and $236 million for BusinessWeek. The rival business magazine Portfolio, from Condé Nast’s is teetering and may not last another year.

The website [1] is one of the top five financial sites by traffic, generating $70 million to $80 million a year in revenue.

In 2006, the Forbes family sold 40% of the company to Elevation Partners, a private equity firm, for $300 million, setting the value of the enterprise at $750 million. The value today is perhaps half that.