Chemical agent attacks are the dispersion of a harmful chemical into the atmosphere. They may be due to terrorist attack or enemy nations as Weapons of Mass Destruction (WMD). More commonly they are the result of industrial accidents due to toxic chemical spills or leaks. As the effects are nearly the same both will be treated as one in this article. 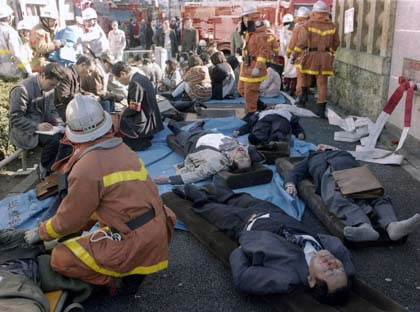 Targeted chemical agent attacks are most likely to occur in urban areas with few exceptions. Accidental chemical spills also occur mostly in urban or industrialized areas, the exception being highway and railroad accidents which result in leaks. Terrorists and nations using WMD's want the largest body count meaning urban areas and civilians are far less prepared for chemical attack than military units. Finally, chemical agents disperse quickly in the atmosphere, becoming ineffective so they do not work well as denial of movement weapons against trained armies. Due to these factors chemical agent attacks can be very survivable due to their short-lived nature. One needs only to concern oneself with two things when you believe a chemical agent attack has been performed; first protect your lungs from the agent and second, protect your skin and eyes from the agent.

There are important steps you should take in addition to using a breathing filter to protect your lungs.

Protecting Your Eyes and Skin

Some chemicals can cause blindness and other can be absorbed through the skin or can cause caustic burns to exposed flesh.

During and for some time after a chemical agent attack most everyone in the area will likely panic, this may cause injury and make escape more difficult. Upon escape from the contaminated areas victims may be required to go through decontamination. Decontamination protocols by fire department Hazmat teams requires all victims to publicly strip naked, be sprayed (showered) with water and then given a simple garment to wear while monitored for negative health effects. All exposed personal property and clothing are destroyed as hazardous materials, even all jewelry in some cases including body piercings. Contaminated buildings must be stripped of anything which absorbed the chemical agents and decontaminated or in extreme cases, condemned for destruction. Vehicles are likely to be ordered destroyed.