From The TSP Survival Wiki
(Redirected from BRICS)
Jump to: navigation, search

The Brick nations or BRICS nations are countries which are in today's economy not considered core nations but whose economies are growing at a very rapid rate. Among these secondary countries are usually included Brazil, Russia, India, China and South Africa, hence the acronym "BRICS."

The first summit of the BRIC nations was held in Yekaterinberg, once an industrial jewel of the Soviet Union. One of the conclusions of this summit is that the United States with its U.S Dollar reserve currency and the European Union with its Euro hold a disproportionate amount of power and that there should be a new multinational entity like the United Nations but with increased representation for these emerging economies.

One of the goals of these five major BRICS nations is trade among each other using their own local currencies rather than first converting the exporter's currency to U.S. dollars and then converting to the local currency of the importers. Once this BRICS trade happens on a large scale it will be very bad for the American economy to lose its reserve status that we have enjoyed since Bretton Woods.

Jack Spirko of the Survival Podcast responded to a shocking video called "If I Wanted America to fail".[1] 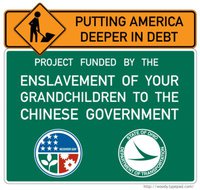