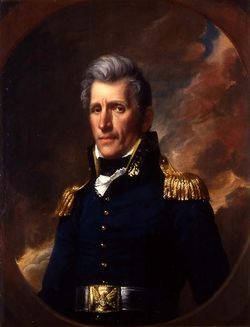 Andrew Jackson's famous quote: "You are a den of vipers. I intend to rout you out and by Eternal God I will rout you out."

Andrew Jackson was the 7th President of the United States of America, elected as a hero after his military triumphs over the Creek Indians of the Southeast and the British at New Orleans in 1815. As President (1829-1837), he destroyed the Bank of the United States, relocated the remaining southeastern Indians, and built a new political coalition, the Democratic party. A self-made man, Indian fighter, war hero and a fighter (and duelist) who believed in action instead of words, he was the iconic Western folk hero. Nicknamed "Old Hickory" by his admirers, he typified popular democracy in the "Jacksonian Age" of the 1830s and 1840s, and became the leader of Jacksonian Democracy during the Second Party System. He was the founder of the Democratic Party and its hero because of his strong use of the federal government to bash conservatives and banks; the poor farmers and workers loved him because he embodied their hopes and fears, their passions and prejudices, their insight and ignorance, better than anyone. However liberals lost faith in Jackson when his harsh Indian policies became a negative in the 1960s. Jackson was a political enemy of the Evangelical Protestants of the day, who denounced his policies and supported the opposition Whig Party.

Born near the North/South Carolina border, Jackson studied law in Salisbury, North Carolina before moving to Nashville, Tennessee. Jackson was the first president who was not born in Virginia or Massachusetts. He fought at an early age in the battle of Stone Ferry during the American Revolution in 1780. As a teenaged volunteer in a local militia, Jackson refused an order by a British officer to polish his boots, and the officer angrily drew his sword and slashed Jackson across his hand and head with it, and imprisoned him. For the rest of his life Jackson loathed the British.

Jackson, John Sevier, and their allies were rich frontier lawyers and businessmen who used their vast land holdings to establish themselves as a political power in Tennessee. They allied themselves with the Jeffersonian Republicans, of the "Old Republican" faction that opposed strong national government. However, Thomas Jefferson and his circle strongly disliked and distrusted Jackson.

Serving a term in the Senate, he alarmed Jefferson but otherwise made little mark.

Jackson sought election as major general of the Tennessee militia partly to escape the circuit riding required while he was a superior court judge. As a military commander he proved himself a master tactician, a brilliant organizer, and effective motivator of men. He won all his major battles, including the decisive defeat of the cream of the British regular army.

Jackson led two great victories in the War of 1812--the first against the "Red Stick" Creek Indian forces that had raided, raped and killed American settlers and assimilated Indians in what is now Alabama. Indians seldom fought pitched battles; they preferred the ambush. Jackson, aided by Cherokee allies, trapped the Creeks at Horseshoe Bend in Alabama in March 1814, and killed over 800 enemy; the rest fled to Spanish Florida. (See Creek War.)

Jackson led a contingent of Tennessee and Kentucky militia who routed over 2,000 British troops in the Battle of New Orleans in Jan. 1815. The defeat ended British plans to turn the Mississippi Valley into a pro-British Indian nation. It was a great victory for Jackson and became source of enormous pride to all Americans.[2]

Jackson attended a Presbyterian church from time to time, and his wife was a devout Baptist. Jackson had little sympathy for religion in the political sphere, unlike many of his opponents (the Anti-Masons and Whigs), who were building political coalitions using religious voting blocs during the Second Great Awakening. For example,Jackson insisted that the mail be delivered on Sundays, much to the anger of the evangelicals.[3]

Although Jackson won the 1828 election against incumbent John Quincy Adams by capturing almost 56% of the popular vote, the campaign was marked by anti-Jackson rhetoric that centered on Rachel Jackson's previous marriage to Lewis Robards and the allegedly "illicit union to Jackson"--that is, bigamy. Jackson's supporters portrayed the Robards matter as a minor legal misunderstanding. Adams's supporters saw the incident as no less than long-term adultery by Andrew Jackson and portrayed Rachel Jackson as an immoral woman, implying the political dilemma that 'a vote for Jackson was a vote for sin.' The controversy paralleled a critical development in American politics. Expansion in voter participation, the growth of state political organizations, party loyalty, and the development of local campaign papers all led to the wide dissemination of scandal and fed 'the hunger of sensationalism.' To offset this, Jackson's supporters portrayed him as a brave soldier endowed with the virtues of manhood and the frontier spirit, placing him outside the usual social constraints.[5]

Jackson was firmly opposed to a national bank, and fought to dismantle the Second Bank of the United States. He vetoed Congress's bill to renew its charter, and began withdrawing money from it. He issued the Specie Circular in July 1836, which required land bought from the government to be paid for in specie (actual gold or silver coins), instead of bank notes. Most historians link this to the Panic of 1837, which broke out weeks after after Jackson had left office and ruined the presidency of his successor, fellow Democrat Martin Van Buren.

Jackson, with the backing of Southern politicians, sought to abrogate the standing treaties with the Chickasaw, Cherokee, Seminole, Creek, and Choctaw nations by evicting them from the land they lived on and relocating them to Indian territory (in present-day Oklahoma). The idea was roundly decried as illegal and inhumane by evangelical Protestants, who had missionaries to the tribes, and by Whigs. Advocates of forced removal, mostly Democrats from the South, called removal a 'humane' and 'compassionate' move to assist a 'dying people.' The debate surrounding removal quickly became a North-South issue with Southern politicians calling their Northern counterparts 'demagogues' who sought 'to weaken the South' by allowing Indians to remain. In 1830, the resolution was approved by Congress and, assisted by Georgia state officials, Jackson began the process of evicting Native Americans. By 1835 the Cherokee, the last remaining Indian nation in the South, had signed the removal treaty and relocated to Oklahoma.[6]

Cave (2003) argues Jackson acted illegally in pressuring Indians to move west of the Mississippi River in the 1830s. The Indian Removal Act of 1830 called for voluntary removal and included safeguards for Indian rights, but Jackson ignored and distorted the act to suit his purposes. The newly formed Whig Party actively opposed Jackson's policies, and congressional legislation dealing with Indian removal was hotly debated and passed only by narrow margins. Had Jackson followed the legal dictates of the 1830 act, he probably would not have achieved Indian removal, says Cave. However Remini (2001) argued that the worst Jackson could be accused of was carrying out what most southern whites wanted at the time.[7]

Jackson thought the voice of the people was supreme law. Although a man of powerful prejudices and passions, he identified with the voice of the people, and thought his election as president gave him the unique power to express that voice. His opponents misunderstood the voice and lacked the legitimate national base in any case. Thus Jackson denounced anyone who crossed him an enemy of the sovereign people. To fulfill this voice of the people in the political arena, he thought that the preservation of states' rights was an indispensable precondition to the achievement of people-oriented democracy. Although Jackson's record was erratic, when his presidency was done, federal authority was vastly weaker, and the states, for practical purposes, were much stronger than before, though as the Nullification crisis proved, he would not tolerate defiance.

After honoring the precedent of George Washington to resign after serving two terms as President, Jackson then supported and advised many future candidates, most notably James K. Polk.

Since 1928, Jackson's picture has appeared on the United States $20 bill - somewhat ironic given that Jackson opposed paper money, wanting the country to use specie (gold and silver) instead.