The .357 Magnum is an extremely popular round for revolvers that is also available for a select few semi-automatic pistols and several carbines. The round is a fairly powerful round for a handgun and revolvers chambered for the round are also capable of firing .38 Special. It was developed by gun expert Bill Jordan who worked with Smith & Wesson to improve the performance of their .38 Police Special round by lengthening the case .10" and strengthening the walls to withstand greater pressures. 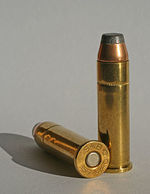 The .357 Magnum is popular for its power, but also for the ability of .357 revolvers to fire .38 Special, effectively doubling potential sources of ammunition in purchasing or scavenging situations. There are also lever action carbines, the Marlin 1894C and the Winchester 94 Ranger, in .357 Magnum giving one the option of having multiple weapons use the same caliber.

The long recommended load for a revolver is the .357 Magnum 125 gr. JHP at about 1,350 fps. With a carbine you get a 300-500 fps. muzzle velocity boost and heavier loads are recommended. For instance, 158-180 gr. bullets are recommended for white tail deer out to 100+ meters. The only warning regarding .38 Special/.357 Magnum rounds in the semi-automatic pistols and carbines is to avoid wadcutter loads (bullet seats flush with end of shell casing) as they will not properly cycle through the weapons but cause jams.