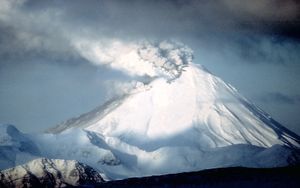 Snow-covered Kanaga Volcano in Alaska erupts a small column of tephra, gas, and steam. Kanaga is a stratovolcano. View is toward the west.

A volcano forms when molten rock, in the form of lava, is able to breach the surface of the Earth. Many volcanoes take the shape of mountains, although some are so large that they form entire islands, as is the case of Mauna Loa. Volcanoes come in three main types, stratovolcano (also composite cone), shield volcano, and cinder cone. Stratovolcanoes are renowned for their explosiveness, which is cause by the high viscosity of the magma they contain. They can grow to be very large and have steep slopes, but in some eruptions can blow themselves apart. In contrast, shield volcanoes contain magma of very low viscosity, resulting in less violent eruptions and shallow slopes. Finally, cinder cones form very fast and consist of amalgamated igneous materials. They have very steep slopes and are susceptible to erosion.

Integrate these below into the ones above: