From The TSP Survival Wiki
Jump to: navigation, search
200px

Unemployment is the state of being unemployed. The U.S. government classifies persons as "unemployed" if they do not have a job, but have actively looked for work in the prior 4 weeks, and are currently available for work. (The labor force is made up of the employed and the unemployed. The remainder—those who have no job and are not looking for one—are counted as "not in the labor force.") [1] "Involuntary unemployment" is when people are unable to find jobs at the prevailing wages for their skills and experience. "Voluntary unemployment" is a normal process when people join the labor force (after leaving school, for example) or move to a new area.

Contrary to a campaign ad for Obama's reelection, "the Massachusetts unemployment rate fell steadily even as the working-age population rose when Romney was governor." (Source: a column in the liberal Boston Globe [2])

Weekly estimates of unemployment use the number of persons filing new claims for unemployment insurance (UI) benefits. Much more accurate data is based on large scale interview surveys, and is reported on the first Friday of the following month. Since 1940 the monthly Current Population Survey (CPS) has been used. [1]

Structural unemployment is much more serious. It means a mis-match of jobs and workers. For example, there may be jobs in the cities and unemployment in mining or logging areas, but people are reluctant to move because of family ties. There may be jobs available in some fields but people who are unemployed lack the necessary skills. This is a structural problem solved by migration, job training and education.

Finally--and most serious--is cyclic unemployment (as in 2008-2009 and the Great Depression), when the whole economy is sagging and businesses lay off tens of thousands of workers every day. Some new jobs are created every month but they are overwhelmed by the jobs that are lost. In February 2009, the U.S. economy lost 651,000 jobs net (that is, jobs that disappeared outnumbered jobs that were created by 651,000). Through April 30, 2009, about 5.7 million jobs were lost in 2008-9.

In times of recession people are unemployed for much longer periods. In July 2009, 5 million people (one out of three unemployed) had been out of work for six months or longer.[2]

Conservative economist Milton Friedman in 1968 introduced the concept of the "natural rate of unemployment," which is the rate generated by the economy which does not cause inflation or deflation.

All of the progress that the US has made over the last couple of centuries has come from unemployment. It has come from figuring out how to produce more goods with fewer workers, thereby releasing labor to be more productive in other areas. It has never come about through permanent unemployment, but temporary unemployment, in the process of shifting people from one area to another.[3] 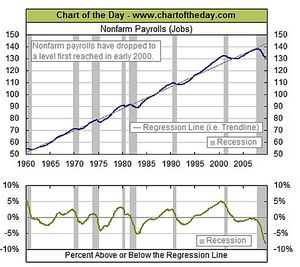