Rifles are firearms with a rifled barrel (as opposed to smooth bored shotguns and muskets) and a shoulder stock (as opposed to pistols). Rifles are generally longer-ranged and have greater accuracy than other types of firearms. 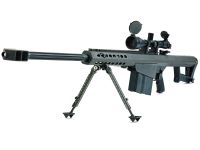 Rifles are available in a wide range of chamberings, from the .22 Long Rifle (LR) which is ideal for hunting small game as well as economical target practice, to the .50 caliber BMG which is good for long-range shooting and penetrating heavy cover or armor. In the middle are popular and powerful hunting cartridges like the .308 and .30-06, which can be used to take most North American game, and intermediate military cartridges like the 5.56mm and 7.62x39mm Soviet, which are well-suited to use in semi-automatic rifles for defensive purposes.

Rifles can be muzzle-loading, black-powder weapons, such as the famous "Kentucky" or "Pennsylvania" flintlock rifles used for hunting in Colonial America, and later pressed into military service in the Revolutionary War. They can also be fully-automatic military "assault rifles" like the M16 and AK47, which are intermediaries between the machine gun and submachine gun. There are also semi-automatic versions of these assault rifles, often also (and inaccurately) called "assault rifles" by the media. Rifles are also available as single shot breechloaders like the NEF Pardner, as bolt-actions like most military rifles of WWI and WWII as well as most of today's hunting rifles, as lever-actions like the famous Winchester of the Old West, and even as pump-actions like the Colt Lightning and Remington's recent pump-action, magazine fed rifles.

Against multiple, armed attackers, at varying ranges and possibly wearing body armor, a semiautomatic, magazine-fed rifle such as the civilian versions of the AR-15 or AK-47 probably represent the best means of defense available to an American Citizen today. For hunting small game, any rifle chambered in .22LR is an excellent choice. For precision shooting at longer ranges, whether hunting larger game or "sniping" at zombies in a post-apocalyptic wasteland, a variety of highly accurate rifles, both bolt-action and semiautomatic, are available in a variety of calibers. A rifle is an extremely useful tool for the survivalist, and great care and consideration should be taken in selecting one appropriate for one's needs.

A rifle's "action" is the method by which a spent cartridge is expelled (if present), a new cartridge is chambered, and the rifle is made ready to fire again.

Muzzleloading is more a lack rather than a type of action. Muzzleloaders must have their powder, wadding, shot, and primer all manually loaded into the rifle from the muzzle end of the barrel. Muzzleloaders are typically Single-shot weapons unless they have multiple barrels (e.g. double barreled rifle).

Breechloading is the opposite of muzzleloading where a rifle is loaded from the back or chamber end of the barrel. Breechloading allowed for multiple chambers (in the case of the Colt revolving rifle, Model 1855) or some other mechanical action to be present giving the rifle the ability to fire faster than a muzzleloader.

Bolt action rifles typically use a manually operated rotating bolt to chamber a new round and eject spent rounds. They are generally considered to be more accurate and reliable than other action types due to their simplicity and relative lack of movement.

Like bolt action, a lever action rifle must be manually operated, but they can be operated at a much faster rate than bolt action rifles due to their simpler motion and lack of a need to reposition the hand to operate the action or fire.

Semi-automatic actions use a small portion of the gas pressure from a fired round to eject the spent round, chamber a new round, and cock the rifle. They allow near instantaneous cycling of a weapon allowing the user to fire a round as quickly as they can pull the trigger. This is the fastest action legally available to citizens of the United States.

A rifle can be fed ammunition in several different ways, the primarly reason for these different mechanisms is to achieve a greater rate of fire or capacity.

Single shot fed rifles require the user to manually place a new round into the chamber each time the rifle will be fired. This is a very slow, but reliable system.

Most rifles are fed by some sort of magazine, most common being a replaceable magazine which allows for the fastest reloading. A replaceable magazine is usually a springloaded box that may contain as few as 5 rounds, or as many as 20 or more rounds which can be quickly removed and replaced for continued firing. Some rifles offer an almost identical magazine that is part of the rifle and has to be manually reloaded when it is spent. Finally, there are tube magazines which consist of a springloaded tube that can be as long as the barrel of the rifle.

Belts are the highest capacity, fastest feeding mechanism. Unlike other mechanisms they do not have any practical limits such as box size, tube length, or replacement times. A belt fed weapon also doesn't remove the round from the carrier as it is fired. The only limit to a belt-fed system is the length of the belt, but other limitations of the weapon such as heat and general wear and tear can limit the weapon's firing-rate. Rifles are not typically belt-fed, that is reserved for fully automatic machineguns. However some semi-automatic replicas of machineguns, legally classified as rifles, still are belt-fed.

There are several types of rifle with various purposes, their primary variable is their size that in turn determines the caliber, range, accuracy, and useability of the rifle.

Bullpup rifles are unique among rifles in that they place the action of the firearm behind the trigger allowing the weapon to have the shortest over-all length for their barrel length since the chamber is at the very rear of the weapon. Bullpup rifles have been in use by military forces since 1977, beginning with Austria and Australia using the Steyr AUG. Since then, Many organizations around the world have adopted bullpup designs in limited quantities, and a handful of nations are currently using them as their primary infantry weapon:

Carbines are a type of rifle, shorter in length, and better suited to close combat. Originally carbines were created for horse mounted troops, such as cavalry and artillery crews. Carbines can be chambered for a pistol round, in which case they are referred to as Pistol Caliber Carbines or PCCs for short (e.g. US M1 Carbine). Carbines can also be chambered for a rifle caliber round, for example, the Soviet M44 carbine which fires the same 7.62x54R round as the M91/30 rifle, or the US Army's M4 Carbine, which fires the same 5.56mm round as the M16 rifle. The advantages of a carbine are that it is typically lighter and more compact than its "parent" rifle, making it handier for close combat and easier to pack and store. The disadvantages are a reduction in range and accuracy, which are nevertheless superior to those of a pistol or shotgun.

Assault rifles are select-fire (semi-auto or fully automatic), gas operated, infantry weapons with a high capacity magazine. They are ideal for use in relatively close combat, from point blank out to 300 or so meters. As such they use an intermediate caliber such as the 7.92 x 33mm Kurz (short), the 7.62 x 39mm P. and the 5.56 x 45mm NATO. They tend to be longer than carbines, but shorter than battle or sniper rifles. True assault rifles are generally not available to civilians, but near-identical semi-automatic only equivalents are often available.

Battle rifles are full power (i.e. 6.5mm - 8mm) long barrelled infantry rifles capable of accurate gunfire out to 500 meters and indirect massed fire out to 2000 meters. They may utilize bolt-action (e.g. SMLE), semi-automatic actions (e.g. Gewehr-43) or be select fire weapons (e.g. FN FAL). Throughout the two world wars the battle rifle was the weapon of choice by all armies for infantry. It has since been universally replaced by the assault rifle as the primary infantry arm.

Sniper rifles are designed to fire from extremely long range and as a result are much longer than other types or rifles. They also generally fire much more powerful ammunition, either a full power round (e.g. 7.62 x 54mm R) or a larger magnum round (e.g. .338 Lapua Magum). Some are designed to fire even larger heavy machinegun rounds (e.g. .50 caliber BMG).

There are thousands of different rifles each with many variations within a given platform. Different rifles are built for different purposes rangine from hunting to warfare. This list contains rifles of notability for their popularity, history, or other factors that make them standout.

There are many different rifle calibers, each with their own advantages and disadvantages. Most calibers have SAE and a metric designation as well as possibly separate military and civilian variations. This list of popular civilian and military surplus calibers is organized by the metric designation when available due to the included length.