Public schools in the United States

From The TSP Survival Wiki
(Redirected from Public schools)
Jump to: navigation, search

"Educate and inform the whole mass of the people... They are the only sure reliance for the preservation of our liberty." -- Thomas Jefferson 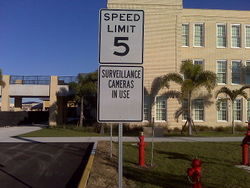 Because of violence, vandalism, and other undesirable elements, this public school has a glaring sign warning of the on-campus surveillance cameras at its parking lot entrance.

Public schools in the United States have become predominantly liberal and atheistic[1][2][3][4] government institutions that employ 3 million people and spend $411.5 billion annually at a cost of $10,770 per student.[5] Liberals censor classroom prayer, the Ten Commandments, sharing of faith in classrooms during school hours, and teaching Bible-based morality.[6][7] Mandatory homosexual indoctrination is common as early as elementary school in more liberal states.[8] The failures of underperforming public schools are paradigm of socialism, along with landfills and the Canadian healthcare system.

The following are characteristics of US public schools:

In many states, administrators and other public school employees are paid full salaries, at substantial public expense, but at some of their schools actual teaching occurs only 4 days a week, rather than 5. These states include: Arizona, California, Colorado, Georgia, Idaho, Kansas, Kentucky, Louisiana, Michigan, Minnesota, Missouri, Montana, Nebraska, New Mexico, Nevada, Oklahoma, Oregon, South Dakota, Utah, Wisconsin, Wyoming ... and Washington passed legislation to allow it there too.[22]

In 1647, Massachusetts Puritans enacted the second law, after Scotland in 1616,[23] establishing universal public schools in the English-speaking world to block the attempts by "ould deluder Satan to keepe men from the whole knowledge of the Scriptures".[24] Each settlement larger than 50 families was required to pay a schoolmaster to teach reading, writing and religious doctrine to the children in the community. Beginning in 1670, Massachusetts provided tax funding for school maintenance. This model was then copied throughout the colonies, and even throughout the world.

Many children did not attend public school for the first two centuries. It was not until 1852 that Massachusetts became the first state to require attendance by students aged 6 through 16, and it was not until 1918 that all states had compulsory attendance laws. High schools did not generally exist until after the Civil War, and the first American kindergarten didn't exist until 1856 in Watertown, Wisconsin.

In response to the perception that public schools have stopped teaching morality, many state education departments have or are in the process of developing "morality" that avoid good and evil, right and wrong, and instead present under the heading of "character" education.[25] The lack of appreciation for right and wrong can surprise outsiders, and even school principals. When one public school student was charged with felony computer crime for altering the grades of 20 students, the principal said, we "want to teach them what's right and wrong, and it's tough for some kids to catch on to the idea that changing grades is the wrong thing to do."[26] The impact of the removal of morality from the public school curriculum (which is also used in private schools) is that "more than one in three boys (35 percent) and one-fourth of the girls (26 percent) — a total of 30 percent overall — admitted stealing from a store within the past year."[27] Liberal politicians are the most frequent opponents of initiatives designed to build moral fiber in the public school system, with organizations like the ACLU and teacher's unions devoting a significant amount of their resources towards this end. In 2010, a school board in North Dakota decided to change the name of their mascot from the "Satans." Liberals unrolled a large-scale media campaign that blanketed the district with pro-Satan propaganda in an attempt to keep the name, but they were unsuccessful. [28]

The White House announced the release of Revised Religious Guidelines for America's Public Schools on May 29, 1998. Within this announcement, President Clinton stated, "Nothing in the First Amendment converts our public schools into religion-free zones, or requires all religious expression to be left behind at the school house door." --President Clinton, July 12, 1998[29]

In 2003, the Education Department released the following guidelines that clarified and added requirements to Public Schools to ensure the religious rights of students.[30]

Schools that don’t allow students to pray outside the classroom or that prohibit teachers from holding religious meetings among themselves could lose federal money, the Education Department said late last week.

The guidance reflects the Bush administration’s push to ensure that schools give teachers and students as much freedom to pray as the courts have allowed.
The department makes clear that teachers cannot pray with students or attempt to shape their religious views. The instructions, released by the department on Feb. 7, broadly follow the same direction given by the Clinton administration and the courts. Prayer is generally allowed provided it happens outside the class and is initiated by students, not by school officials.

The department, however, also offered some significant additions, including more details on such contentious matters as moments of silence and prayer in student assemblies. And for the first time, federal funds are tied to compliance with the guidelines. The burden is on schools to prove compliance through a yearly report.

Teaching the Bible in Public Schools

The National Council on Bible Curriculum in Public Schools[31] (NCBCPS) provides a program for teaching the Bible in public schools. Currently, the NCBCPS's Bible curriculum has been voted into 462 school districts (over 1,900 high schools) in 38 states. Over 210,000 students have already taken this course nationwide, on the high school campus, during school hours, for credit.

Suppression and intolerance of alternative views

Activist judges have proclaimed that teaching creationism[32] and intelligent design[33] in public schools is unconstitutional because they claim that such teachings would amount to a government establishment of religion, which is prohibited by the First Amendment.[34]

Since the rapid expansion and liberalization of public schools after World War II, students' literacy levels have dropped significantly. While the average 14-year-old had a vocabulary of 25,000 words in 1945, the equivalent student in 2000 had a vocabulary of only 10,000 words, a severe disadvantage in an increasingly textual world.[35]

Textbooks (K-12) have been systematically analyzed in a study funded by the U.S. government. The 1986 findings were that massive, systematic liberal bias exists, resulting in several information blackouts in four key areas of modern American life—marriage, religion, politics, and business. While an actual conspiracy was then ruled out, the cause was found to be a "a very widespread secular and liberal mindset" pervading "the leadership in the world of education [and textbook publishing]"[36].

Professor Larry Schwikart, of the University of Dayton, wrote a book about biased textbooks. False claims common in those texts included that the Founding Fathers wanted a "wall of separation" between church and state, that "Lincoln issued the Emancipation Proclamation only because he needed black soldiers", and that "Mikhail Gorbachev, not Ronald Reagan, was responsible for ending the Cold War". [37]

Evidence for bias in school textbooks includes promotion of Homosexual agenda, support of liberal viewpoint, as well as support of the unproven theory of evolution. Most Biology textbooks do not provide the Creationist viewpoint a chance, or even a second thought.

Due to the strength of the nation's teachers' union, it is nearly impossible to fire a bad performing teacher with tenure. The process can take years and involves countless steps to even attempt. The union claims that the protections are needed against arbitrary and malicious lawsuits.

The New York public schools system has approximately 700 teachers accused of insubordination to sexual misconduct. They remain in seclusion from the classroom but are paid full salaries until their cases are heard, sometimes from months to years later. All because their union contract makes it extremely difficult to fire them. [38]

Here is a mostly unimpressive list of people who attended public school after school-sponsored prayer was banned in 1962:

"Educate and inform the whole mass of the people... They are the only sure reliance for the preservation of our liberty." -- Thomas Jefferson