The City of Oakland incurred large amounts of damage, particularly when several sections of the top deck of Interstate 880 (the Cypress Freeway) collapsed and fell onto the bottom deck at the height of afternoon rush hour commute traffic. The collapse trapped hundreds of motorists in their cars underneath the fallen sections, killing 42 people and injuring many others. Several sections of the freeway fell over a length of many miles. Further damage was done when aftershocks occurred shortly after the main quake. Automobiles were crushed and fires started from broken gas tanks. Firefighters and rescue workers faced difficulty in rescue attempts due to the remaining portions of the freeway being unstable and in danger of total collapse.

The Oakland-San Francisco Bay Bridge also received major damage, as a section of the elevated upper level of the bridge fell onto the lower level.

In San Francisco, the Marina district area sustained major damage. The area was built on landfill and thus the ground became unstable (see: liquefaction). Historic buildings fell and gas and water lines broke, leading to fires. The debris and danger hindered the firefighters from fighting the fires. Many homes in the Marina district were destroyed or damaged, and 9 people lost their lives. 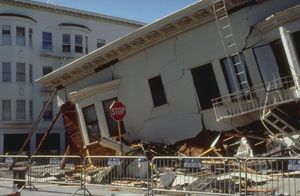 Santa Cruz was another city severely affected by the quake, as buildings collapsed in the downtown area, killing 2 shoppers in stores. Many buildings were damaged and had to be rebuilt.

Throughout the San Francisco Bay area and surrounding cities, homes lost power and telephone service for many hours, some for days.

The 1989 World Series, between the two Bay Area teams, the San Francisco Giants and the Oakland Athletics, was delayed for 10 days.

After the earthquake, other freeways and bridges in the San Francisco Bay area were evaluated to determine if there was risk of failure or collapse in the event of another earthquake, and to ascertain if they had sustained damage.

The Golden Gate Bridge was determined to be at risk and engineers began a seismic retrofit program in August 1997 which is tentatively scheduled to be completed by 2012. In addition, all of the Bay Area's toll bridges, (with two exceptions) have undergone seismic strengthening, though some have not yet been completed.

The Bay Area Rapid Transit (BART) commuter system survived the earthquake with minor damage, but as a preventative measure, reinforcements were made to the transbay tube, (an underwater tunnel spanning one side of the bay to the other and connecting Oakland and the East Bay to San Francisco) and to the systems aerial structures.