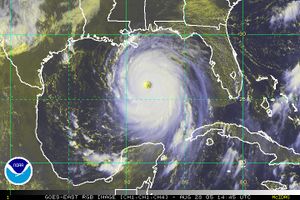 Hurricane Katrina in August 2005 was one of the strongest and most devastating storms to impact the coast of the United States during the last 1 years. With sustained winds during landfall of 125 mph (110 kts) (a strong category 3 hurricane on the Saffir-Simpson scale) and minimum central pressure the third lowest on record at landfall (920 mb), Katrina caused widespread devastation along the central Gulf Coast states of the U.S., with the cities of New Orleans, Louisiana, Mobile, Alabama, and Gulfport, Mississippi bearing the brunt of Katrina's force, which caused $81.2 billion in damage.

Tropical Storm Katrina developed initially as a tropical depression (TD #12 of the season) in the southeastern Bahamas on August 23rd. This tropical depression strengthened into Tropical Storm Katrina the next day. It then moved slowly along a northwesterly then westerly track through the Bahamas, increasing in strength during this time. A few hours before landfall in south Florida at around 6.30 EDT on August 25th, Katrina strengthened to become a category 1 (wind speeds of 75mph or greater) tropical storm. Landfall occurred between Hallandale Beach and North Miami Beach, Florida, with wind speeds of approximately 80 mph (70 kts). Gusts of above 90 mph (78 kts) were measured as Katrina came ashore. As the storm moved southwest across the tip of the Florida peninsula, Katrina's winds decreased slightly before regaining hurricane strength in the Gulf of Mexico. Given that Katrina spent only seven hours over land, its strength was not significantly diminished and it quickly re-intensified shortly after moving over the warm waters of the Gulf.

A Barge was washed ashore after Katrina

Katrina moved almost due westward after entering the Gulf of Mexico. A mid-level ridge centered over Texas weakened and moved westward allowing Katrina to gradually turn to the northwest and then north into the weakness in the ridging over the days that followed. Atmospheric and sea-surface conditions (an upper level anticyclone over the Gulf and warm SSTs) were conducive to cyclone's rapid intensification, which lead to Katrina attaining 'major hurricane' status on the afternoon of the 26th.

Continuing to strengthen and move northwards during the next 48 hours, Katrina reached maximum wind speeds on the morning of Sunday August 28th of over 170 mph (150 kts, category 5), and its minimum central pressure dropped that afternoon to 902 mb - the 4th lowest on record for an Atlantic storm. Although Katrina, at its peak strength was comparable to Camille's intensity, it was a significantly larger storm and impacted a broader area of the Gulf coast.

Although tropical cyclones of category 5 strength are rarely sustained for long durations (due to internal dynamics), Katrina remained a strong category 4 strength hurricane despite the entrainment of dryer air and an opening of the eyewall to the south and southwest before landfall on the morning of the 29th. Landfalling wind speeds at Grand Isle, Louisiana were approximately 125 mph (110 kts) (strong category 3 intensity) with a central pressure of 920mb - the 3rd lowest on record for a landfalling Atlantic storm in the US. Rainfall amounts for Louisiana and along the Gulf are described below along with other impacts of the storms.

During its initial landfall in southern Florida, Katrina generated over 5 inches of rainfall across a large area of southeastern Florida. An analysis by NOAA's Climate Prediction Center shows that parts of the region received heavy rainfall, over 15 inches in some locations, which caused localized flooding.

Winds at landfall north of Miami were 80 mph (category 1 strength), leading to some damage and extensive power outages.

Rainfall from Katrina's outer bands began affecting the Gulf coast well before landfall. As Katrina came ashore on August 29th, rainfall exceeded rates of 1 inch/hour across a large area of the coast. NOAA's Climate Reference Network Station in Newton, MS (60 miles east of Jackson, Mississippi) measured rainfall rates of over an inch an hour for 3 consecutive hours, with rates of over 0.5 in/hr for 5 hours during August 29th. Precipitation analysis from NOAA's Climate Prediction Center show that rainfall accumulations exceeded 8-10 inches along much of the hurricane's path and to the east of the track.

Wind speeds over 140 mph were recorded at landfall in southeastern Louisiana while winds gusted to over 100 mph in New Orleans, just west of the eye. As the hurricane made its second landfall on the Mississippi/Louisiana border, wind speeds were approximately 110 kts (125 mph). Gusts of over 80mph were recorded in Mobile and 90 mph in Biloxi, Mississippi.

As the storm moved inland and weakened to a tropical storm on the 29th, rainfall became the primary impact. Rainfall amounts exceeded 2-4 inches across a large area from the Gulf coast to the Ohio Valley. As a result, flood watches and warnings were common across these regions. Rain bands from Katrina also produced tornadoes causing further damage in areas such as Georgia.

From the Gulf states (principally Louisiana and Mississippi), the loss of life is estimated to be 1,836 people. It is clearly one of the most devastating natural disasters in recent US history. From Katrina's first landfall in Florida, while it was at category one strength, initial estimates suggest 11 deaths resulted. 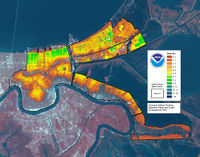 Extent of flood damage within the city of New Orleans (NOAA)

The loss of life and property damage was worsened by breaks in the levees that separate New Orleans from surrounding lakes. At least 80% of New Orleans was under flood water on August 31st, largely as a result of levee failures from Lake Pontchartrain. The combination of strong winds, heavy rainfall and storm surge led to breaks in the earthen levee after the storm passed, leaving some parts of New Orleans under 20 feet of water. Storm surge from Mobile Bay led to inundation of Mobile, Alabama causing imposition of a dusk-to-dawn curfew for the City. Large portions of Biloxi and Gulfport, Mississippi were underwater as a result of a 20 to 30+ foot storm surge which flooded the cities.

A major economic impact for the nation was the disruption to the oil industry from Katrina. Preliminary estimates from the Mineral Management Service suggest that oil production in the Gulf of Mexico was reduced by 1.4 million barrels per day (or 95 % of the daily Gulf of Mexico production) as a result of the hurricane. Gasoline had reached a record high price-per-gallon as of Monday August 30th with concerns over refinery capacity apparently driving the increase.

In addition, the hurricane caused 44 oil spills in Southeast Louisiana, totaling approximately 7 million gallons.[1] The vast majority of oil spilled was from on-shore industrial plants and above ground storage depots plus other facilities. Damage to pipelines and oil platforms was very significant. 45 oil platforms were destroyed and 54 pipelines were damaged (10" or larger). [2] 70 oil spills (one barrel or larger) totaling over 11,000 gallons of crude oil and other refined products were reported. 211 minor pollution incidents were also reported. Minor pollution incidents are categorized as incidents involving less than 500 barrels of oil that do not reach the coast line. No significant spills from any offshore wells were reported. [3]

Over 1.7 million people lost power as a result of the storm in the Gulf states, with power companies estimating that it would take more than several weeks to restore power to some locations. Drinking water was also unavailable in New Orleans due to a broken water main that serves the city. Power was lost to 1.3 million customers in southeastern Florida from the initial landfall on August 24th.

Both of New Orleans' airports were flooded and closed on August 30th and bridges of Interstate 10 leading east out of the city were destroyed. Most of the coastal highways along the Gulf were impassable in places and most minor roads near the shore were still underwater or covered in debris as of August 30th. Katrina also disrupted travel as it headed inland, with more than 2 inches of rain falling across a large area from the coast to parts of Ohio during the 48 hours after Katrina made landfall.

An August 2008 report by Oxfam America showed that while progress has taken place, it is behind expectations, and that much work remains to be done:

The disaster fueled partisan criticism of the response of federal officials, causing significant political damage to the administration of President George W. Bush. In particular, deaths of 1,836 people were rather pointedly blamed on President Bush and his appointees, on the grounds that their response was "too little, late."

Independent sociological studies have shown that nearly all the deaths were due to people waiting too long to obey the evacuation orders. Also, the Democratic governor and Democratic mayor refused (for as long as it was politically viable) to accept federal help. Internally, resources such as school buses were simply abandoned instead of being used to shuttle out the economically disadvantaged residents of New Orleans lower 9th ward.

Integrating these two versions above and below:

Katrina, refers to both the Hurricane that hit the Gulf Coast region of the United States during the end of August 2005 and the aftermath existed in the months following the storm. 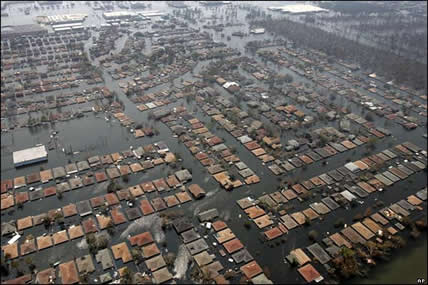 Hurricane Katrina was one of the worst natural disasters that hit the United States. However it did not just impact the US as it also hit the Bahamas and Cuba.