Germany (official name: Federal Republic of Germany) is a federally organized Democracy in Central Europe with a population of about 82.2 million. The capital city and seat of government is Berlin.

As Europe's largest economy and the most populous nation wholly within Europe, Germany is a key member of the continent's economic, political, and defense organizations. The central German bank, the Bundesbank, has historically been the most influential force within the financial markets of the European Union.

Currently Germany is ruled by Conservative Christian Democratic Union (CDU) under chancellor Angela Merkel and left-center SPD. Before it was ruled by CDU and the liberal-libertarian Free Democratic Party (FDP). 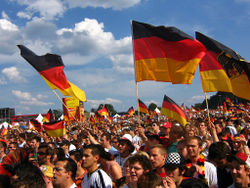 The average age at marrying (for the first time) for men was 32 and for women 29. Abortions are officially illegal, according to a 1995 law. However, prosecutions are not brought if they are performed in the first three months of pregnancy after consultation with a doctor. The annual abortion rate, at under ten per 1,000 women aged 15–44, is among the lowest in the world

Germany had a Net Reproduction Rate (NRR) of 0.66 in 1999. A rate of NRR=1.0 equals a constant population. Therefore, in terms of births and deaths (and not counting immigration) the population is shrinking by 34% between generations.[3]

Life expectancy of females at birth in West Germany rose from 71 years in 1954 to 80 years in 2000; the expectancy for boys rose from 66 to 75. Expectancy in the eastern zone was about three years less.

Projected population in 2050 is 76 million, down from the present 82 million. There will be more deaths than births, and that is largely offset by a net inflow of immigrants from 2000 to 2050, predicted to be about 240,000 per year.

Germany's recent debate about immigration misses an important reality: for Germany, and most all developed countries, attracting educated and skilled foreign workers is a matter of economic survival. [2]

Most inhabitants of Germany are ethnic German. There are, however, more than 7 million foreign residents, many of whom are the families and descendants of so-called "guest workers" (foreign workers, mostly from Turkey, invited to Germany in the 1950s and 1960s to fill labor shortages) who remained in Germany. Germany has a sizable ethnic Turkish population. Germany is also a prime destination for political and economic refugees from many developing countries. An ethnic Danish minority lives in the north, and a small Slavic minority known as the Sorbs lives in eastern Germany. Due to restrictive German citizenship laws, most "foreigners" do not hold German citizenship even when born and raised in Germany. However, since the German government undertook citizenship and immigration law reforms in 2002, more foreign residents have had the ability to naturalize.

Germany has one of the world's highest average levels of education, technological development, and economic productivity. Since the end of World War II, the number of youths entering universities has more than tripled, and the trade and technical schools of the Federal Republic of Germany (F.R.G.) are reasonable good. German 15-year olds score about average in comparison with similar countries.

The conservative government has tried to reverse the decline by offering €1.9 billion (about $2.7 billion) in excellence grants to numerous schools spread over a period of five years--far less money than Harvard spends in one year. Little improvement has been reported from this small investment. The leading schools are Freiburg, Heidelberg and Konstanz (all in the southern state of Baden-Württemberg), Aachen, Göttingen, the Free University of Berlin, two schools in Munich and Karlsruhe’s Technical University.[4] Meanwhile top German scientists and engineers migrate to the United States, where their talents are appreciated.