From The TSP Survival Wiki
(Redirected from GOA)
Jump to: navigation, search 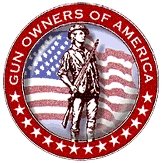 The Gun Owners of America (GOA) is a non-profit conservative gun rights lobbying organization based in Virgina and founded in 1975 by Senator H.L. Bill Richardson (now retired). GOA most consistently supports the right to bear arms (both for the individual citizen's self defense and for the Militia) under the Second Amendment, and related rights necessary to preserve the Second Amendment right, such as the First Amendment right of political free speech.

GOA is a national membership organization of 300,000 American patriots dedicated to protecting and defending their Second Amendment freedom to keep and bear arms.[1]

"GOA fought for and won, the right of gun owners to sue and recover damages from the federal government's Bureau of Alcohol, Tobacco and Firearms (BATF) for harassment and unlawful seizure of firearms.[2]

Larry Pratt has been Executive Director of Gun Owners of America for over 30 years. Pratt has appeared on numerous national radio and TV programs such as NBC's Today Show, CBS' Good Morning America, CNN's Crossfire and Larry King Live, Fox's Hannity and Colmes, Alex Jones' InfoWars and many others. He has debated Piers Morgan, Congressman James Traficant, Jr. (D-OH), Charles Rangel (D-NY), Rep. Carolyn McCarthy (D-NY), Senator Frank Lautenberg (D-NJ), and Vice President Al Gore, among others. His columns have appeared in newspapers across the country. He published a book, Armed People Victorious, in 1990 and was editor of a book, Safeguarding Liberty: The Constitution & Militias, 1995. His latest book, On the Firing Line: Essays in the Defense of Liberty was published in 2001. Pratt has held elective office in the state legislature of Virginia, serving in the House of Delegates. Pratt directs a number of other public interest organizations and serves as the Vice-Chairman of the American Institute for Cancer Research.[3]

GOA Rankings of Senate and House Members for Firearms Freedom

Just like the NRA[4], GOA provides yearly rankings of legislators on whether they support the inalienable Second Amendment gun rights or support unconstitutional gun grabbing and disarmament of the citizens of America.

Conservative "Free States" such as Idaho's Mike Crapo and Wyoming's Mike Enzi and John Barrasso both receive "A" grades.[5]