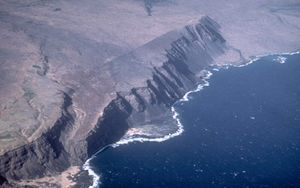 Aerial view toward the NE of the Pu`u Kapukapu fault scarp (maximum height about 320 m) in the Hilina fault system, south flank of Kilauea Volcano, Hawai`i. In Hawaii, these tall cliffs are called "pali's".

Faults are fractures or fracture zones in the Earth's crust along which one side moves with respect to the other. A fault scarp is a cliff or steep slope that sometimes forms along the fault at the surface. There are many types of faults (for example, strike-slip, normal, reverse, and thrust faults) ranging in size from a few tens of meters to hundreds of kilometers in dimension. When faults occur along crustal plate boundaries, such as with the San Andreas Fault in California, they are called transform boundaries.