Binoculars, monoculars, and spotting scopes are portable devices for magnifying objects at a distance, making them easier to see. The ability to see and observe prospective targets, shelter, prey, etc... from a distance before you can be seen is a significant advantage over those without the ability.

Binoculars offer the advantage of stereo vision when compared to monoculars and spotting scopes, preserving some depth perception and avoiding the necessity to close one eye.

Monoculars offer the same magnification as binoculars at slightly less than half the weight, volume, and complexity. They are generally considered to be more durable due to their greater simplicity. For the purposes of light-weight bug out gear these advantages are significant.

Spotting scopes are the high-powered alternatives to binoculars and monoculars, while they aren't exactly bug out gear they certainly have their place, especially for bugging in. 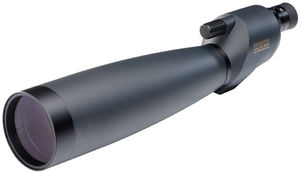 Binoculars and their kin will come with various features

Most optical devices, particularly those with higher magnification, have the ability to be mounted for better stability. For items such as spotting scopes this is essential.